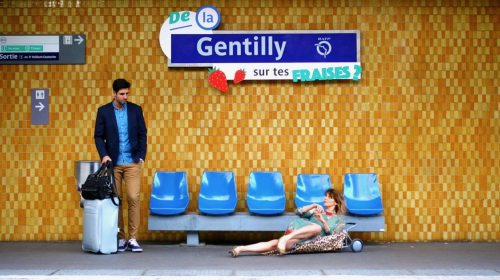 She claimed she was quitting but Nadia Vadori-Gauthier continues her one-minute dances – at this writing, she’s done a bit more than 1500, a full day plus an hour – since she began her ritual in the bewildered grief and defiance that followed the Charlie Hebdo mass murder of satirists by religious fanatics in January 2015.

There was always more than just marking the feelings of the moment in Vadori-Gauthier choreography – an effort to look again at Paris. Apart from being lively and lovely, Jérôme Cassou’s film Une Joie Secrète: Danser, un acte quotidien de résistance poétique,  (“Hidden Joy: dancing, a daily act of poetic resistance”).

Joie Secrète succeeds in discerning some new patches in the Paris patchwork and a new way of fitting Paris people into the urban esthetic. I say “Paris people” instead of “Parisian” because Vadori- Gauthier’s people are more witness than actor. In color, then, Joie secrete shows a Paris “harlequin” and, in among the stone, steel and glass of street and building, people. 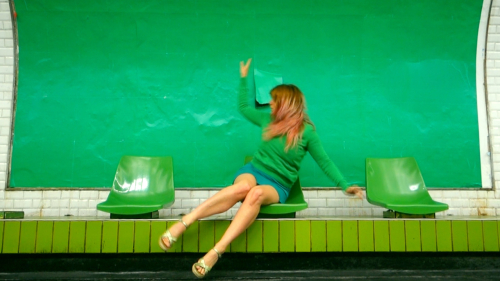 In color.  Joie Secrète shows that Paris’ urban fabric has been, is being, significantly nicked, slapped and splashed with bursts and dashes of primary color. Asked straight up after the screening, Vadori-Gauthier denied scenarizing them. As she says, she was responding to a cache of primary colors in the landscape, a lot of which, if not all, are from the decades-long accumulation of hard-plastic urban furnishings – think metro seats or trash bins but also all manner of coverings, frames, signs and electronic info boards as well as flowers and more adventurous taste in house paint. If you care to look, the primary-color harlequin Vadori-Gauthier is pointing to is there in the places and spaces, waiting, maybe, for its Caillebote. 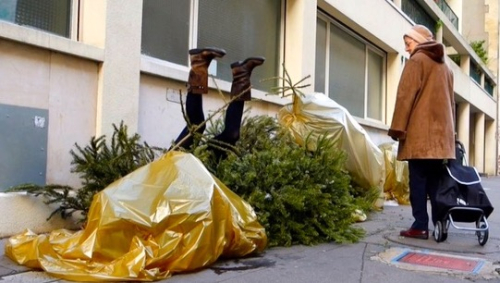 In people. Set in ordinary places in the central city, Vadori-Gauthier’s short choreographies – those in Cassou’s film and those that are not – show a strong, not to say, unusual, complicity of performance with place. If most places are recognizable to someone who knows the city fairly well, Vadori-Gauthier isn’t dancing them, highlighting them, using the recognition value, like say Woody Allen does. Rather, her performances show her fitting into those places, inhabiting them rather than using them. The 2015 Charlie Hebdo and November 13 mass murders were seen as trying to drive people out of the city, take over. It makes sense that on one level Vadori-Gauthier’s Une minute de danse par jour is about owning and keeping the city, in the same way as the march for the Republic – “We belong here and we are not afraid”. But the Joie Secrète take on Vadori-Gauthier’s one-minute of dance suggests that the idea of “being part of the city” goes beyond ownership or citizenship.

As those sad mass-murderers reminded the world, ownership and citizenship can be disputed and even taken away, they are subjective and political, not objective and real. 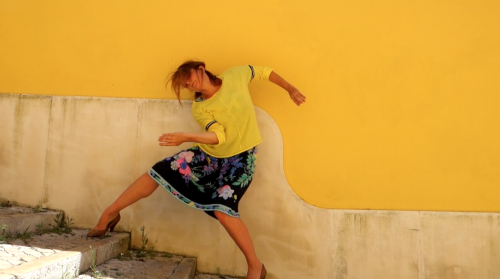 If we make people part of the décor, as much a part of the city as the stacked stones, worked metal and glass, the rain gutters and doors, the trash bins and benches and the swatches of primary color, if we take them as objects as well as subjects, they become real too. Ironically, this realness is a belonging far more profound than ownership. As objects of the play we animate, Joie Secrète (and one minute of dance a day, too,) suggests, who can dispute our place in it?